The S&P 500 stock market index took a breather and ended its six-month winning streak, declining -4.8% for the month. Even after this brief pause, the S&P has registered a very respectable +14.7% gain for 2021, excluding dividends. Nevertheless, even though the major stock market indexes are roaming near all-time record highs, FUD remains rampant (Fear, Uncertainty, Doubt).

As the 10-Year Treasury Note yield has moved up to a still-paltry 1.5% level this month, the talking heads and peanut gallery bloggers are still fretting over the feared Federal Reserve looming “tapering”. More specifically, Jerome Powell, the Fed Chairman and the remainder of those on the FOMC (Federal Open Market Committee) are quickly approaching the decision to reduce monthly bond purchases (i.e., “tapering”). The so-called, quantitative easing (QE) program is currently running at about $120 billion per month, which was established with the aim to lower interest rates and stimulate the economy. Now that the COVID recovery is well on its way, the Fed is effectively trying to decrease the size of the current, unruly punch-keg down to the volume of a more manageable punch bowl.

Stated differently, even when the arguably overly-stimulative current bond buying slows or stops, the Federal Funds Rate is still effectively set at 0% today, a level that still offers plenty of accommodative fuel to our economy. Although interest rates will not stay at 0% forever, many people forget that between 2008 and 2015, the Fed Funds Rate stubbornly stayed sticky at 0% (i.e., a full punch bowl) for seven years, even without any spike in inflation.

Because the economy continues to improve, current consensus projections by economists show the first interest rate increase of this cycle (i.e., “liftoff”) to occur sometime in 2022 and subsequently climb to a still extraordinarily low level of 2.0% by 2024 (see “Dot Plot” below). For reference, the projected 2.0% figure would still be significantly below the 6.5% Fed Funds Rate we saw in the year 2000, the 5.3% in 2007, or the 2.4% in 2019. If history is any guide, under almost any scenario, Chairman Powell is very much a dove and is likely to tap the interest rate hike brakes very gently. 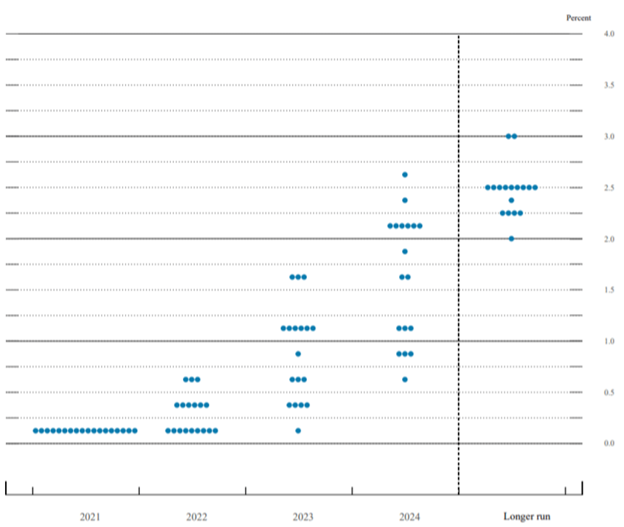 Source: Seeking Alpha
Low But Not the Lowest

In a world of generationally low interest rates, what I describe as our low bond yields here in the United States are actually relatively high, if you consider rates in other major industrialized economies and the trillions of negative-interest-rate bonds littered all over the rest of the world (see August’s article, $16.5 Trillion in Negative-Yielding Debt). Although our benchmark government rates are hovering around 1.5%, as you can see from the chart below, Germany is sitting considerably lower at -0.2%, Japan at 0.1%, France at 0.2%, and the United Kingdom at 1.0%. 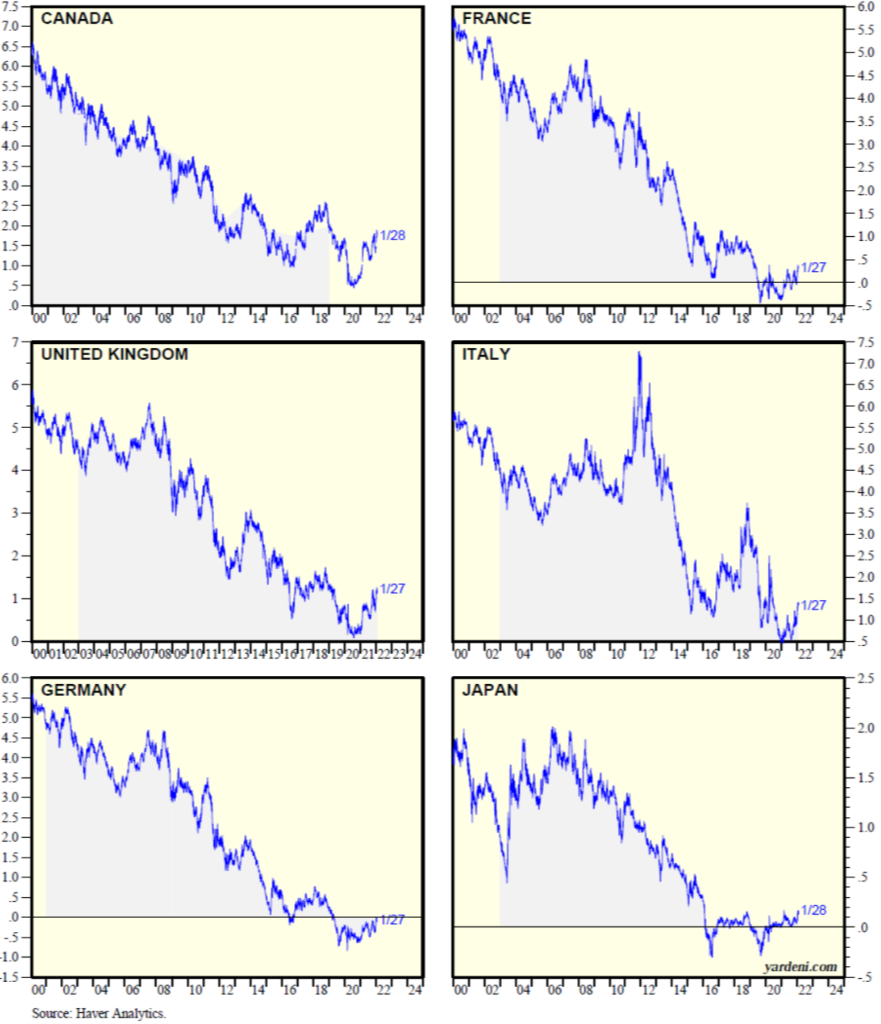 As with many government related policies, the Federal Reserve often gets too much credit for successes and too much blame for failures, as it relates to our economy. I have illustrated the extent of how globally interconnected our world of interest rates is, and one taper announcement is unlikely to reverse a four-decade disinflationary declining trend in interest rates.

Back in 2013, after of five years of quantitative easing (QE) that began in 2008, investors were terrified that interest rates were artificially being depressed by a money-printing Fed that had gone hog-wild in bond buying. At that time, pundits feared an imminent explosion higher in interest rates once the Fed began tapering. So, what happened after Federal Reserve Chairman Ben Bernanke broached the subject of tapering on June 19, 2013? The opposite occurred. Although 10-Year yields jumped 0.1% to 2.3% on the day of the announcement, interest rates spent the majority of the next six years declining to 1.6% in 2019, pre-COVID. As COVID began to spread globally, rates declined further to 0.95% in March of 2020, the day before Jerome Powell announced a fresh new round of quantitative easing (see chart below). 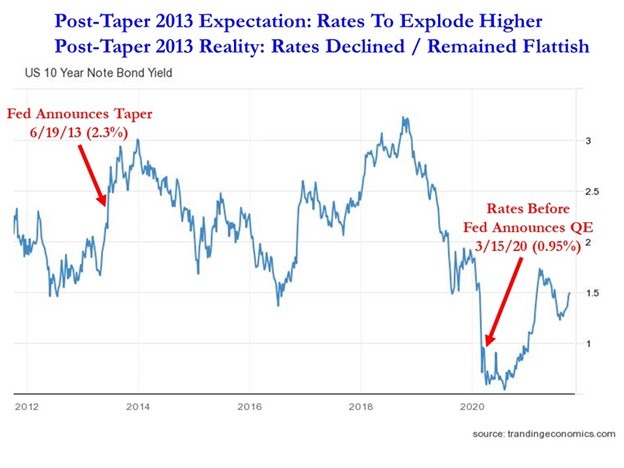 Source: Trading Economics (annotations by Sidoxia Capital Management)
Obviously, every economic period is different from previous ones, and fearing to fall off the floor to lower interest rate levels is likely misplaced at such minimal current rates (1.5%). However, panicking over potential exploding interest rates, as in 2013 (which did not happen), again may not be the most rational behavior either.

If interest rates are low, and inflation is high (see chart below), then what should you do with your money? Currently, if your money is sitting in cash, it is losing 4-5% in purchasing power due to inflation. If your money is sitting in the bank earning minimal interest, you are not going to be doing much better than that. Everybody’s time horizon and risk tolerance is different, but regardless of your age or anxiety level, you need to efficiently invest your money in a diversified portfolio to counter the insidious, degrading effects of inflation and generationally low interest rates. The “do-nothing” strategy will only turn your cash into trash, while eroding the value of your savings and retirement assets. 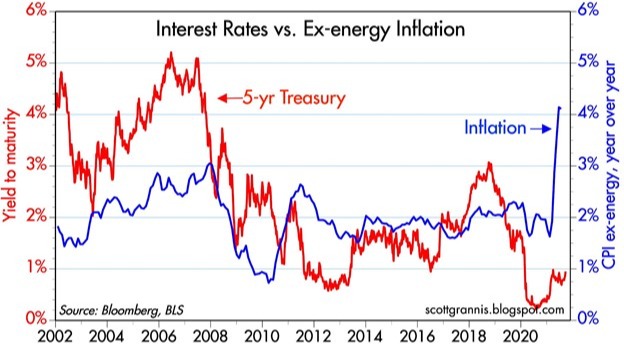 This article is an excerpt from a previously released Sidoxia Capital Management complimentary newsletter (October 1, 2021). Subscribe on the right side of the page for the complete text.

DISCLOSURE: Sidoxia Capital Management (SCM) and some of its clients hold positions in certain exchange traded funds (ETFs), but at the time of publishing had no direct position in any other security referenced in this article. No information accessed through the Investing Caffeine (IC) website constitutes investment, financial, legal, tax or other advice nor is to be relied on in making an investment or other decision. Please read disclosure language on IC Contact page.